Hey guys! Long time no..talk! It’s been a loooooooong two weeks. Tests, quizzes, papers, and more. But the real reason I haven’t been blogging is…my phone stopped working! And I honestly didn’t realize until then,  just how much easier it makes …everything. First of all, I didn’t take ANY pictures without my phone. I’m a college student, and I’m not going to carry my camera around ALL day, so I basically rely on my phone for food pictures. Second of all, I just felt more stressed/busy- everything took more planning because once I went somewhere I knew I wouldn’t be able to change the plans//contact anyone.

Anyway, long story short, my new phone finally arrived yesterday (after being sent to New York instead of South Carolina..) , and I also finished two tests so I am back to share my recent eats & activities! 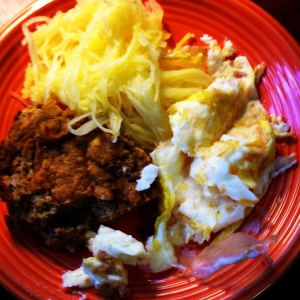 ^^Breakfast of the champions? Well, at least it was color coordinated. 1 egg, spaghetti squash, and a delicious slice of paleo pumpkin bread that I definitely need to give you guys the recipe for^^

^^Furman Fall, I really am blessed to go to such a beautiful school^^ 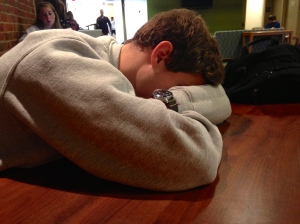 ^^and to go there with my best friend.^^ 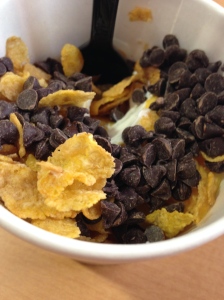 ^^a treat from the Dining Hall while I was studying for my tests yesterday. gf corn flakes, chocolate chips, a little greek yogurt, and peaches. you just need a treat sometimes, ya know?^^

^^One of my favorite on-campus dinners: a large salad from the ‘pden’ aka our mini food court. You get lettuce + 7 toppings, and they chop them all up. Mine was cucumber, bell pepper, turkey, parmesan cheese, strawberries, walnuts topped with red wine vinegar and olive oil.^^

^^after a long day, I was starving when I got back to my apartment. These chips– cooked in avocado oil instead of a harmful seed oil — and they happen to also be extremely delicious^^

check out Peas And Crayons for more WIAW fun!

what have you been up to lately?

worst experience you’ve had with a phone?

Morning! It’s already Wednesday and I can’t wait for Friday  This weekend is our ‘fall break’ (just a mini-break with no class Monday&Tuesday) and I have big plans… getting supplemental applications done and finally re-organizing my room! Plus some fun activities thrown in with my roommate. It’s going to be the perfect combination of work + rest.

On to the good stuff… WIAW!

*be sure to head over to Peas and Crayons to check out more WIAW posts or add your own!* 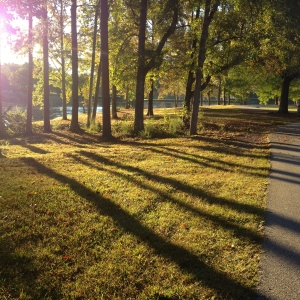 ^^a beautiful morning around the lake, as usual^^ 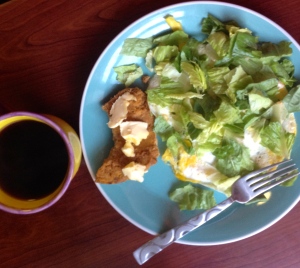 ^^lettuce, eggs, and some paleo pumpkin bread (I made with coconut flour) topped with Kerrygold grass-fed butter^^ 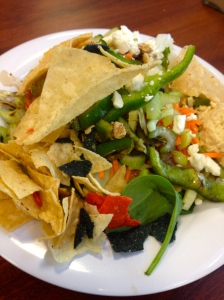 ^^dining hall lunch. on a busy day (Tuesdays are especially busy for me!) I am so thankful for on-campus dining options. Although it can be difficult to find healthy options, you can certainly do it if you don’t mind eating the same thing most of the time. for me, it’s a salad with a little feta, some balsamic vinegar and chips. the chips aren’t the *best* option, but if I go for just a salad, i’ll be hungry an hour later! i also grabbed some grilled chicken to eat on the side.^^ 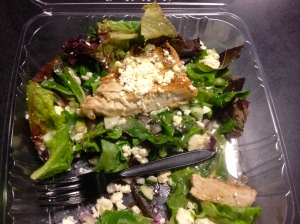 ^after running around campus to class, lab, ‘mock interviews’ (practice for Med School), and a club meeting, i couldn’t wait to grab some dinner.  my boy and I stopped by The Paddock, our campus restaurant. It’s kind of a burger place, with some other options like sandwiches, salads, and wings thrown in. i grabbed the falafel salad but replaced the falafel with chicken. It was simple and delicious, just what I needed after a long day.^

Are there healthy options where you work // go to school?

Healthy living is all about balance right? Workouts, an active lifestyle, healthy foods, and some indulgences. I eat my vegetables, my protein, my good fats, and I try to live an active lifestyle. Sooooo, when I decide I want to throw some chocolate chips on my oats? Not a big deal. I roll with it. Even if it’s two days in a row…

Oats, almond milk, roasted nuts, and a few chocolate chips. A happy start to my day. 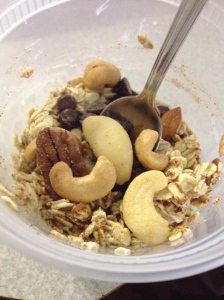 Workouts are, of course, an important part of the healthy lifestyle. However it’s important not to push too hard. During stressful weeks, intense workouts can put unnecessary stress on your body.

My workout yesterday was limited by another clumsy accident… I walked into the gym and went to hop on a treadmill. To my surprise… it was already on, at 6.3 mph. There was no one in sight, and I don’t know why it was on but… it left me pretty beat up. My right knee was skinned and my left knee got thrown into the edge of the treadmill, leaving me with some weird hole-esque wound. My arms got a little “treadmill-burn” as well, but I’m so thankful it wasn’t my face that hit the spinning band.

Today, my knee is pretty sore and a little swollen, but I got in a 45 minute Arc workout, and it actually felt good to stretch my knees out a little. It might be a few days before I attempt to run though…

Move on, right? I rarely go a full week without injuring myself, so I’m pretty used to this kind of this now.

Another key element of my balanced lifestyle? Heaps of colorful veggies keep me happy, and full of energy. I try to go for a big bowl of vegetables, some protein, and some fats. Balance!

Lettuce and mustard (not a full meal): 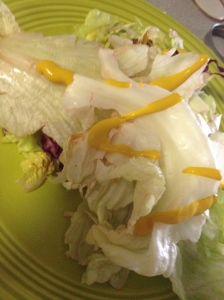 “Falafel” Salad with chicken instead of falafel. 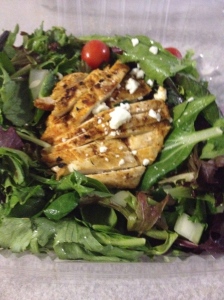 Take-out salad from the dining hall-salads are my go-to option for the DH. There aren’t many healthy options, and this way I can stick to whole, unprocessed foods, that I know haven’t been covered in unhealthy seed oils or gluten-containing sauces. Salsa and hummus are great toppings + flavor adders. 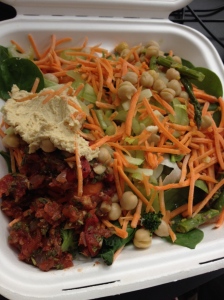 What are your best tips for a healthy lifestyle?

Hey y’all! It’s been a few days! Things are crazy here. For the South at least. It started Tuesday afternoon, with snow, then a snow day Wednesday, and now..it’s Thursday morning and a balmy 17 degrees out. Oof! This New York girl has gone week, and this weather is too cold for me! Anywho.. let’s back up and recap the past few days.

Monday was pretty straight forward– these are the highlights. 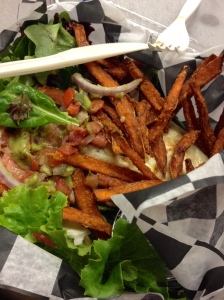 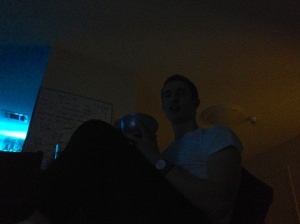 Later Monday night, I chilled with the boys and watched some Game of Thrones.. not the hugest fan so far! Although they did start me on episode 9, so there was a lot of confusion and catching up. 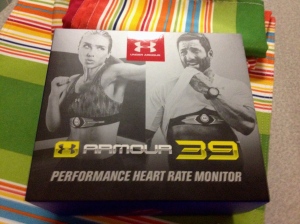 ^I got my workout done early, because there were rumors of snow, and I wanted to workout before the gym closed! I was decked out in Under Armour from head to toe, except for my favorite Brooks running shoes! I had to capture it. Also, I don’t know how to color coordinate…especially with workout clothes. Don’t judge.^ 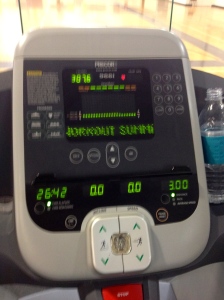 ^3 mile run. 9 min pace. Not speedy for you racers out there, but speedy for a novice like me! I do most of my runs at a 9:40-10:00 pace, so it felt awesome to really push myself and rock it for a shorter run. I think I’m going to start doing “faster” runs on Tuesdays and then slower on Thursdays to save up for my long run on Saturday. Unless I’m doing my long run on Sunday. So, we’ll see.^

^26 more minutes on the Elliptical… time I was waiting for the boy to come pick me up, so I didn’t have to walk outside in the freezing/snowy weather.^

Lunch was eaten dining hall style with my roommates and the boy. Salad, and chips + hummus. Simple, delicious.

Around 3:30, we all received a text message that campus would be closing at 5 pm, due to inclement weather. At this point it was already snowing, but very lightly. So the boy ordered a pizza for himself and his roomies {because the dining services were all going to close..} and we drove to pick it up. So scary! The roads were insane, people sliding everywhere, and accidents every mile. I am so thankful that Nathan has 4 wheel drive and we were alright. I was shocked though, and am praying for the people who were in accidents, injured, or affected in any way by the storm. The south is just not prepared for this kind of thing. 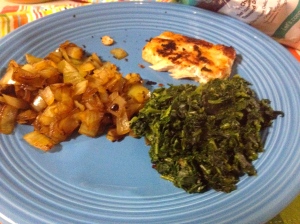 ^Dinner, made in the apartment. Onions, spinach, and salmon.^

I doodled around my apartment for a while, doing some ‘homework’ aka watching TV and playing on Pinterest. Finally, at 9:30, we received a text that classes were cancelled for Wednesday. Snow day!!! My first full one in 3 years at Furman.

Do you love snow days?!